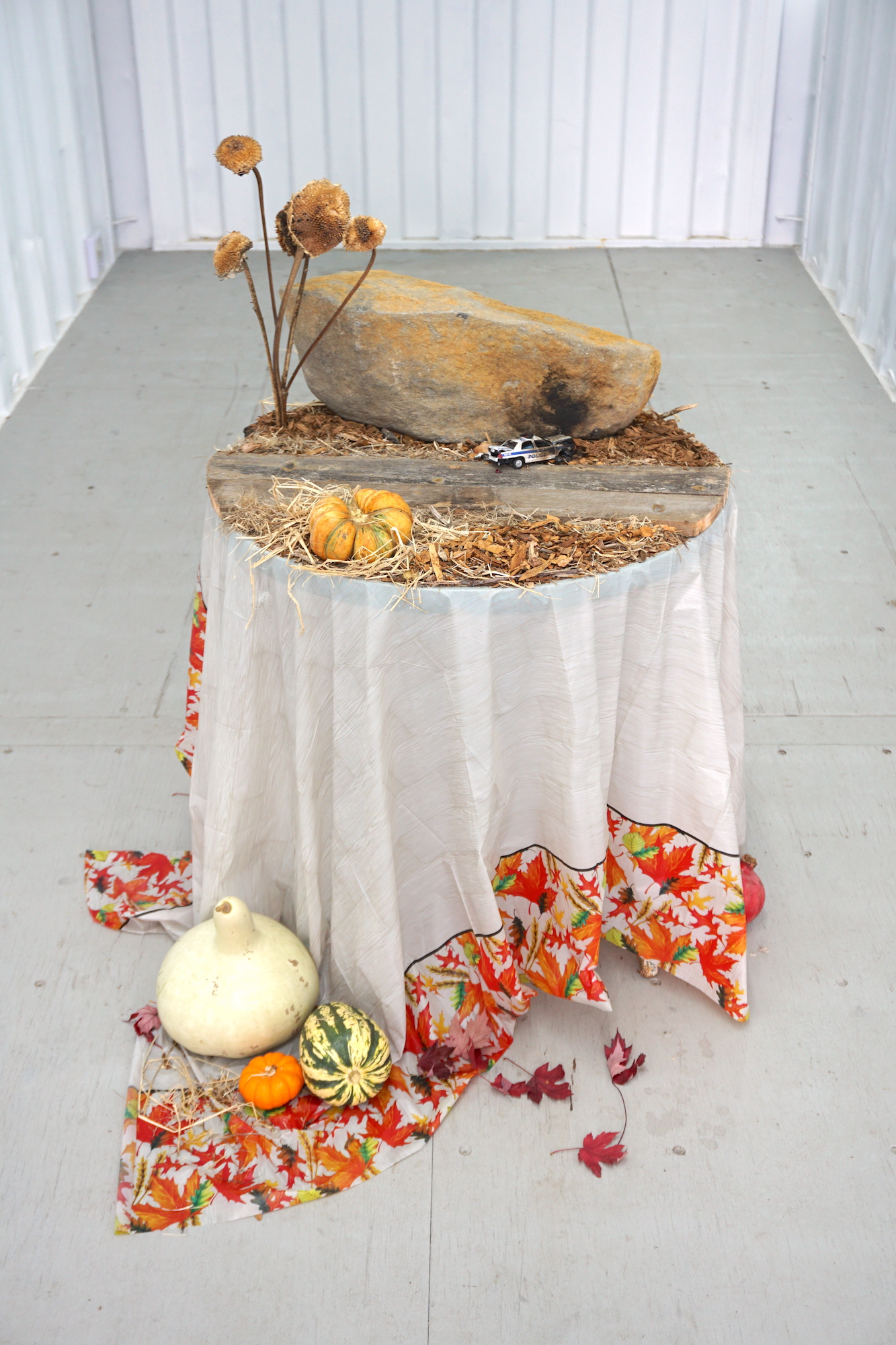 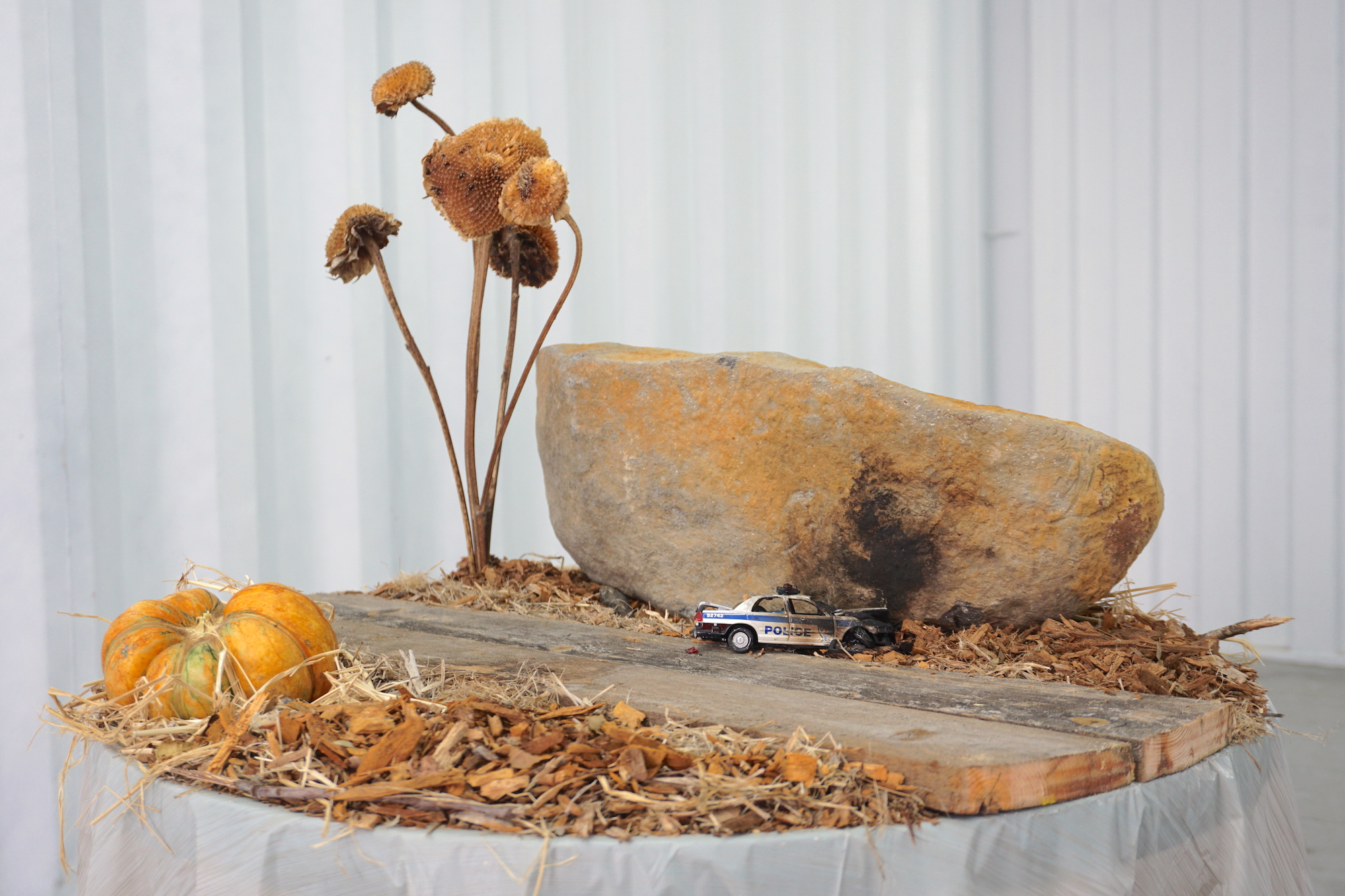 Sometimes, when a man is holding a pencil, his hand won’t release it no matter how badly he wants to let go. Instead the hand tightens rather than opens. There’s a passage in a book by Maurice Blanchot which describes the writer as a man with two hands: The right hand writes, wants desperately to write, while the left hand cannot or chooses not to. The right hand holds the pencil involuntarily, like an addict following a desire that is neither properly outside nor inside of them. The left hand doesn’t write but it can reach out and take the pencil, to interrupt what is being written. “Mastery,” Blanchot concludes, “always characterises the other hand, the one that doesn’t write.”

Since this year, Benedikt has been working on a series called Zum Stand der Dinge (“On the State of Things”). For example; a car was in the wrong place at the wrong time, a fire has burned to the end, a man is running late, a pig considers its reflection, a building will soon be built. Like the left hand’s intervention, all of these short stories relate to time in complex ways. They are generic in the way that an allegory should be and they are specific in the way that an allegory should be. (Open enough. Closed enough). The fruit gets boiled down to its sugars to make jam. Like most art and story-telling, this is a question of economy too, about big returns on possible meaning for small expenditures on time and materials. (“And what was Marx’s left hand doing while his right wrote Das Kapital?”) If we accept that writing is a negotiation between two desires that map onto the two hands, then writing is also a negotiation of two times: A right-handed time that is continuous and horizontal and a left-handed time that is discontinuous and vertical. The right hand desires the infinite pro- longation of time, the deferral of judgement or conclusion. The left hand insists upon the break, the full-stop, the deadline about which meaning will have to organise itself. Time is suddenly coming down. What is left is left. Both of these times are part of writing, or maybe writing is just a plane on which these times have to get negotiated. The cosmic nature of this negotiation is equaled only by its banal everyday-ness. This is often how it happens and it happens very often.

Benedikt Bock (*1987, Germany) is an artist and writer based in Zurich. Alongside his sculptural practice, he writes literary texts, publishes, organizes readings, and curates exhibitions. Since 2018, Benedikt has shown his sculptures and texts at Cabaret Voltaire Zurich, Museum Haus Konstruktiv, Helmhaus Zurich, Milieu Bern, Sangt Hipolyt Berlin, Winona Brussels, Hot Wheels Athens, Tank Basel, and Fotomuseum Winterthur, among others. In 2020 he founded the reading series „Texte zum Nachdenken“ with various guests from literature and art. Benedikt published his second book „Vögel/Birds“ in 2021 and is currently working on his first novel. In 2022 he was awarded with two work grants from the city and the canton of Zurich.